A few months ago we held a Contest whereby we challenged our community to develop a new 3D printing technology using an Ultimaker Original. 13 year old Aidan Leitch was one of the winners and attempted to make a Silicone 3D printing process.

Aidan made a Syringe extruder that uses a peristaltic pump to extrude a two part silicone into a basin to cure. The resulting shapes he’s been able to create are closer to blob than Michelangelo but this is a very promising idea. There are many two component materials such as polyurethane & epoxy adhesives. If we could make it possible to print materials such as these reliably it would be a big step forward.
I asked Aidan about his project and he said that,
“One of the biggest issues was making a good syringe extruder. There were some designs already out there but none that truly fit what I was doing. The part that took me longest was making changes in Cura. “
What more work will you do to improve the project?
“To improve, I’d need to make a better syringe extruder (possibly a direct one, as opposed to using the filament to push the syringe) and also a better system for delivering the other part of the silicone mix. The peristaltic pump I used was really slow. 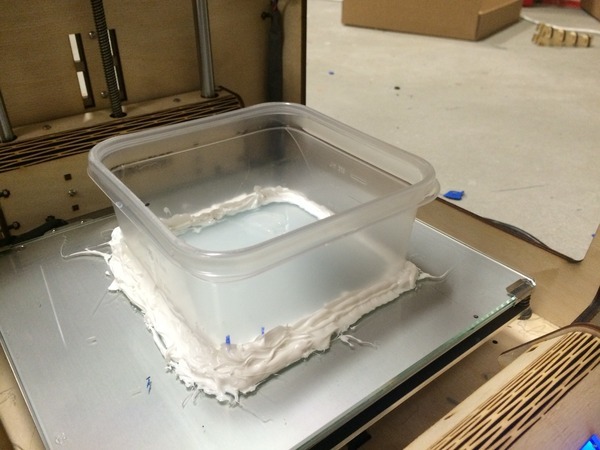 The basin fixed to the build plate

What results do you have right now?
As of right now, I have successfully had the printer add one part of the silicone into the basin of the other part and have them cure. To make it work better, I’d to make the previously mentioned changes (better syringe extruder and better delivery system) along with further tuning of the software. Many of the parts for the paste extruder are fully 3D printable and attach directly to the printhead. Besides this, there are the electronics/pump, the basin, and some changes in the software.
What did you learn?
I’ve learned quite a bit from this project! Here’s some examples:
-How to read and write basic Gcode
-How to accommodate in software for physical issues (like friction in the syringe)
-Uncured silicone is messy stuff
Because it is all deliciously open source you can download and build on Aidan’s project here.