In order to find out how to improve YouMagine we conducted a survey with 501 Community Members. We’d like to thank all of you who participated! We’ve analyzed the answers and read through all of the input and suggestions you gave. In addition to the responses that we can tabulate directly we asked for a lot of “open” responses in order to get suggestions & ideas. We’re currently comparing these ideas & suggestions with our development roadmap to see how we can change the roadmap in order to better meet our community’s needs. We’ve already put a number of easier to implement ideas and improvements into our development backlog and these will be built soon. We’re also going to be doing more analysis in order to see what YouMagine should become in the future. We are building YouMagine for you and the better we can make it suit your needs the better it will be. Because of this the survey was very important to us. We are looking for more mechanisms whereby we can let users tell us what to build and what to change. If you have any ideas in this regard, please do tell us.

Even though 501 respondents is a significant sample of our community and can be used as a representative sample for the 3D printing community globally due to its nature this survey will have some limitations. Firstly, the people who are likely to complete  a survey will tend to be predisposed to caring about the subject of the survey. What the silent majority thinks is not something you can actually ever survey. Or in other words, “What percentage of people don’t like surveys?” & Why don’t some people like surveys?, is something we’ll never know. Our community consists of people who tend to be passionate about open source and open hardware. Our sample is also skewed towards people who are experienced 3D printer operators. We will also tend to have more people who have been 3D printing for longer and have built their own kits as well as designed and built their own 3D printers. Because YouMagine is supported by Ultimaker we will also tend to have more Ultimaker users and Ultimaker-minded people than the 3D printing population at large. We will also tend to reach more people who like to share their open source designs online because that is what the site does at the moment. We therefore are assuming that we’re missing many companies, closed source people and noobs in the sample. But, generally the sample, if qualified as above, can be used to gauge what our community needs and be used to generally learn about 3D printing peoples.

We got some feedback about the survey itself. Many found it a very positive thing and told us that it was good that we were listening to our community in this way. Some did however think that the survey was too long. We will make any surveys we do in the future shorter. Some others thought we should have more “other” and Not Applicable responses. We will do this next time. Some were confused by the bed adhesion question. In this question we asked “For bed adhesion I use…?” People noted that it would depend on the bed and material. We added this question also as a control question but understand that it may be confusing. Similarly for the slicer and 3D modeling software questions people indicated that they used several instead of just one.

Where does the YouMagine community live?

We know from Google Analytics that our community comes to us from 218 countries and territories worldwide. People from 49 different countries completed the survey. Immediately this shows us the limitations of our survey approach. The most popular country by far is the Unites States.

We can see differences between the popularity of the site versus the respondents and should be mindful of these. Below you can see a heat map showing you the top 25 countries and the relative popularity. 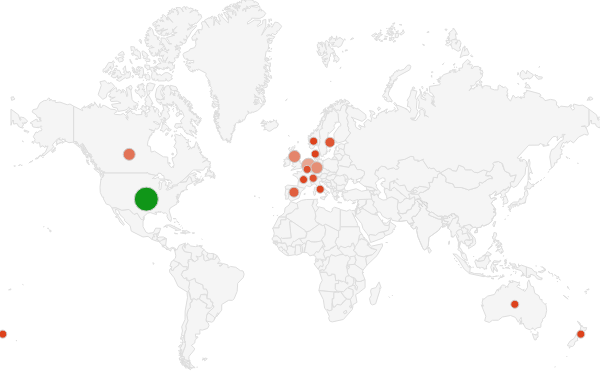 What do we need to improve most about YouMagine? 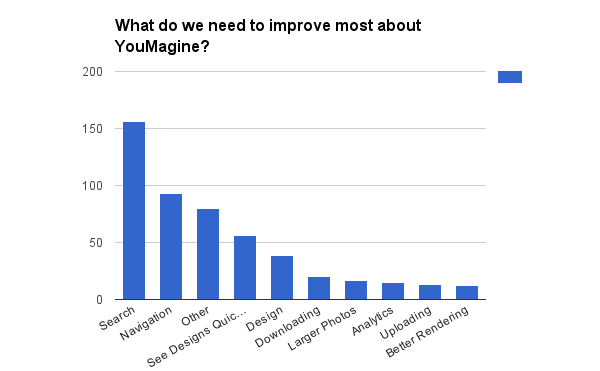 We can clearly see that the biggest point of improvement needs to be search. We’re working on this and it will be improving soon. People also think we need to have better navigation. Generally if we read through the comments people also feel that we can improve the usable space. A lot of people don’t like the margins around the pages and think that images can be larger and we can be using the space more efficiently. We will be working on a complete site redesign that incorporates these wishes.

If we break out the users we can see that two different distinct user groups can be identified. One group wants things such as pagination, see many designs at once, scroll quickly through many designs etc. They want to find and download things quickly. We’re looking at how we can speed up the workflow from this group. The other group wants more interaction and social features. We also learned from the survey that often single features such as issues with the aspect ratio of the photos is a huge turn off for individual community members. We’re using the outcome of this survey to build the site as you would like to have it built. If you have any suggestions as to a feature or improvement, please do email joris (at) youmagine.com

The second part of the survey is here and the third here.