Sprint performance is a team of two Dutch guys competing in the national NSSC dragrace championship. Sprint performance are YouMagine community members. I contacted the teammembers Peter en Benjamin, because they build awesome bikes for dragracing. Their second bike for example, was built for the 50cc shifter class. Benjamin became Dutch champion with it, the fastest time achieved was 7.130 seconds. 0-100 is faster than a Lotus Elise S. The corresponding top speed was an impressive 110 km/h. You can read parts of my interview with them below the picture with Benjamin in action! 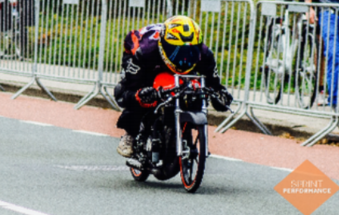 The NSSC championship is a Dutch moped drag race championship in which the rider and machine have to cover 150m from a standing start, as fast as possible. The Sprint Performance team has been competing in this championship for over 6 years now and their aim has always been to be the fastest.

For the 2015 season they decided to step up their game and build a complete new machine for the 70cc class such that they can become champions. The new machine has to be lighter, faster and more powerful than any of their previous machines. In order to reach this kind of performance they need to explore new fabrication methods and this is where 3D printing comes into play.

Sprint Performance is currently developing their own special 2-stroke cylinder which has to be cast in aluminum. They use an Ultimaker2 to convert the complex shapes from the computer model into a true model. Interesting is that they are attempting to apply casting methods in a new way order to overcome the problem of manufacturing expensive molds.

The Ultimaker 2 is of more use to them than just using it to develop a new type of cylinder. It is also used to manufacture prototypes of parts, such that they can be test fitted first before machining them from aluminium. Furthermore, the ride position is fine tuned with 3D printed parts to determine the optimal geometry. These parts are shared on YouMagine with anyone who is interested, such that they can benefit from Sprint Performance’s knowledge too. If you are interested and want to know more about them, feel free to follow them on their SprintPerformance facebookpage.