During the BETTshow in London I spoke with Andrew Smith and Stephen Atkinson from Fuel 3D. You can check out a Fuel 3D Scan here on their YouMagine account. Fuel 3D created a 3D scanner that is meant to be very easy to use in combination with a 3DPrinter.  I was curious to find out if their scanner is suitable for students to use in schools, so I asked Andrew & Stephen of Fuel3D.

Andrew smith is the Business Development manager at Fuel3D. As a biology graduate who had worked for medical devices companies, he originally joined the company to work on the company’s medical scanning product. As the applications for the company’s products have grown, so have the areas (including education) that he is focusing on.

Stephen Atkinson is one of the Applications Engineers at Fuel3D. Whilst studying Product Design at University he gained experience working in various design consultancies, after graduating from University in summer 2014 Stephen started at Fuel3D. As an Application Engineer he deals with allot of the application development and customer technical support. 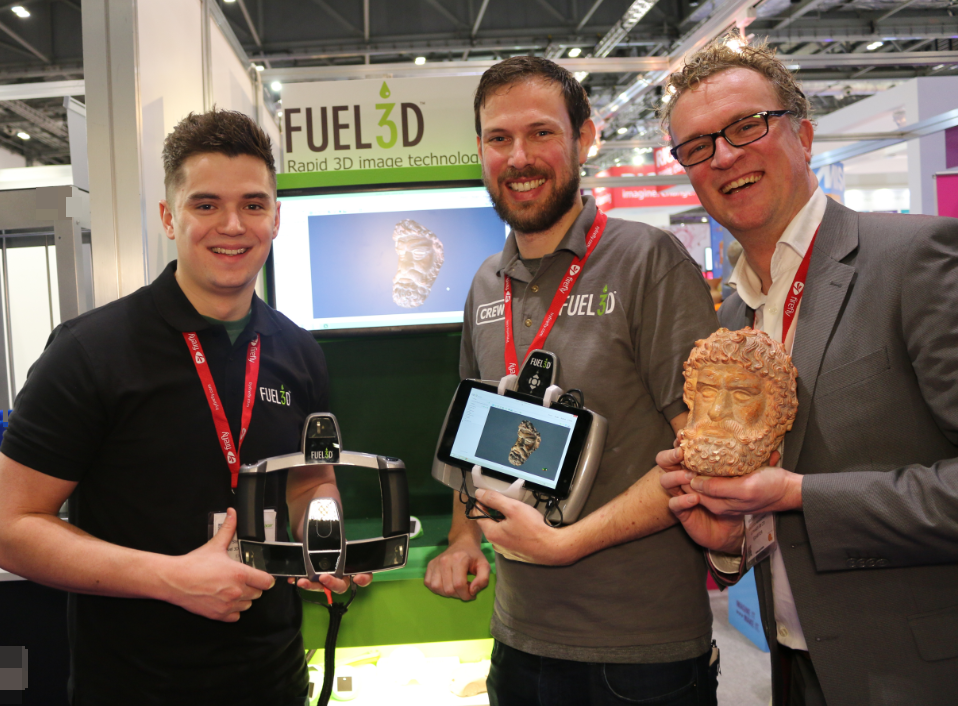 Fuel3D is a developer of advanced 3D scanning systems and solutions. Originally developed for the medical imaging sector, the Fuel3D technology has been adapted for the broader 3D market, with the goal of bringing the benefits of point-and-shoot 3D imaging to consumers, professionals and businesses. Since raising more than $300,000 and generating worldwide attention through its successful Kickstarter campaign in 2013 the company has raised millions in private investment and signed retail and distribution partners across the world. In 2015, the company launched SCANIFY, a handheld 3D scanner that allows users to quickly and easily capture 3Dmodels of everyday objects for 3D printing or on-screen applications. Based on technology developed by Professor Ron Daniel, Lecturer in Engineering Science at Oxford University, Fuel3D is today led by Stuart Mead, CEO.

The Fuel3D story began in a lab at Oxford University, Professor Daniel and one of his doctoral students realized that they might be able to create something in the field of 3D printing. Some lateral thinking led them to the idea of using 3D photography to address the challenge of measuring and assessing the healing of chronic wounds. The wound measurement product was differentiated by its high quality output at a low price, which prompted the company to consider how to capitalise on this in other markets. In early 2013, the 3D printing market was taking off and it seemed an clear candidate for the company’s scanning technology. This led to the highly successful Kickstarter campaign that would ultimately drive the development and launch of SCANIFY.

In the year ahead, Fuel3D will be exploring a number of avenues in the education sector, in particular focussing on informing educators about how SCANIFY’s ability to help create unique content can address the challenge of inspiring students to engage in 3D printing,. In addition, the company is looking at possible opportunities in content generation for computer game and visual effects courses, and in Blue Foam Modelling, which is used in many schools and colleges for prototyping projects.

Fuel3D SCANIFY 3D Scanning system is aimed at bringing 3D scanning to a much wider audience.  By providing hi resolution 3D scan data in a fraction of a second using a portable device that captures in a similar way to digital camera it is highly intuitive and allows almost everyone to capture data for use in 3D printing, and 3D design. Combine this with a price point that is below $1500 it is an excellent value educational tool for generating content for digital and design platforms.