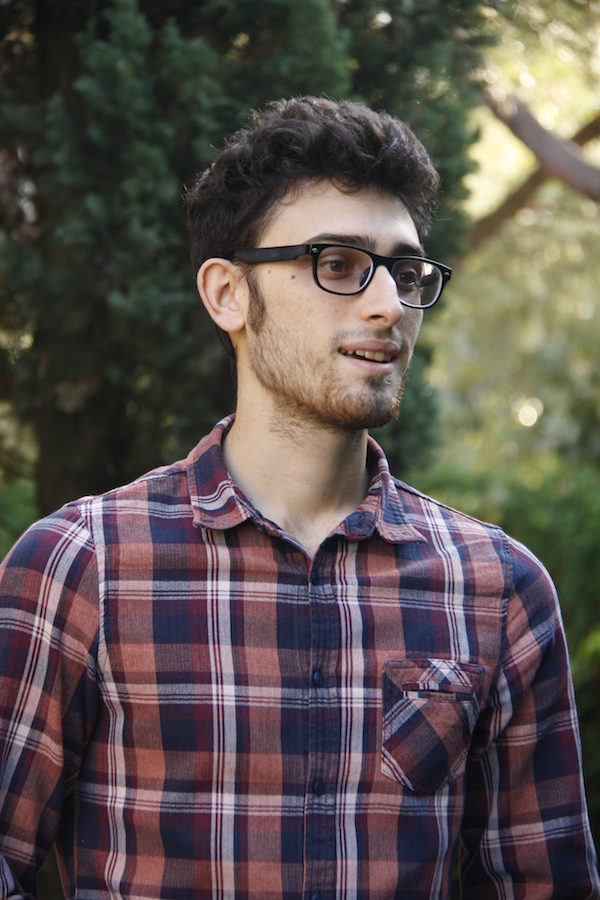 Augustin Flowalistik is a YouMagine Community Member and award winning designer who has made waves with his low poly 3D printed designs. Augustin is originally a graphic designer but now works extensively with 3D printing. We love his work. Furthermore Augustin shares his designs for free on YouMagine but people have been selling these designs or derivatives of these designs. He finds himself at an interesting point in time where 3D printing is gaining a lot of traction but we haven’t figured out how to properly regulate and guide sharing. Due to our deep interest in Intellectual Property and 3D printing (and because he makes cool stuff!) we asked him for an interview. You can check out Flowalistik’s YouMagine profile or his home page here.

Why did you go from graphic design to 3D printing?
I’m currently studying a Design Degree in the Complutense University in Madrid. It’s mostly focused on graphic design, although I’ve had some subjects focused on object design. Any of my teachers have ever talked about 3d printing, but as I love technology, I knew 3d printing would be something important in the near future. Until 2014 all my projects were focused on graphic design and illustration as I didn’t have the possibility to design and create my own objects. It wasn’t until Sept 2013 that I purchased my first 3D printer kit, and it was one of the best decisions I’ve ever made.
What tools do you use to 3D print?
I’ve got a Prusa i3 and an Ultimaker 2. I usually print with the Ultimaker as it’s easier to use, but when it’s about a low poly design I always print it with the Prusa to check that it can be printed with a more-afordable 3d printer. Also, I only work with PLA, as I find it easier to work with. 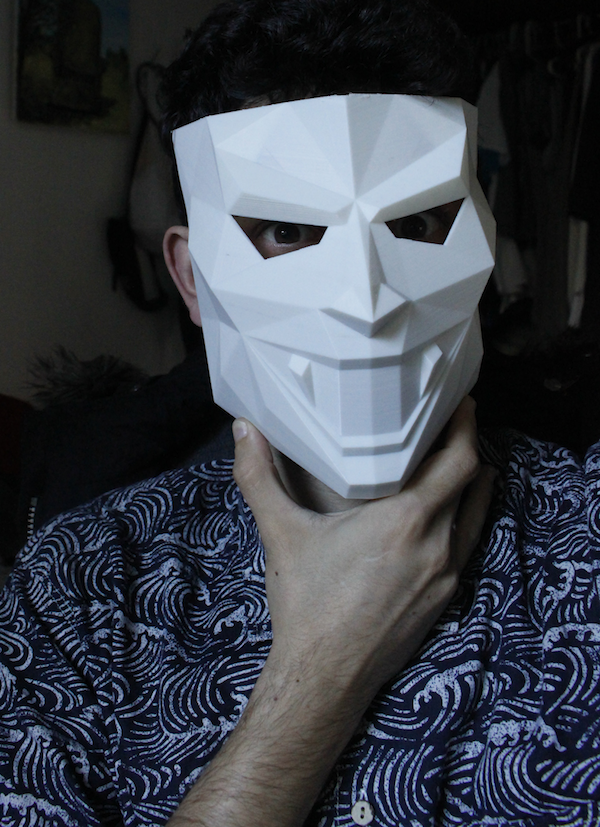 Augustin with one of his 3D printed masks

What software do you use?

I use 3DS Max to design all the low poly models (Pokemon, Videogame Characters, Masks…) and for more precise things I use Solidworks. In the near future I pretend to learn to use Blender and Freecad, as I would like to work 100% with open hardware and software. 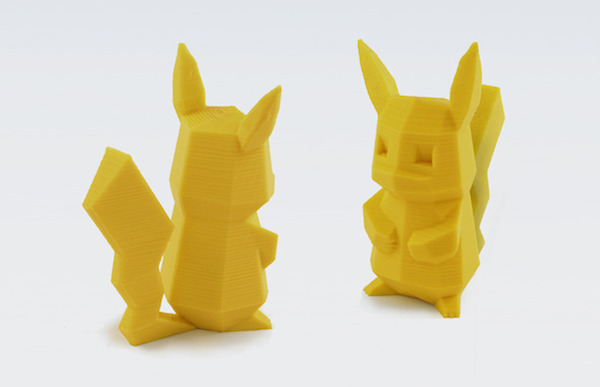 Do you have tips for graphic designers wanting to 3D print things?
Well, when I bought my first 3d printer I didn’t know what I would find, and if I would really love 3D printing. Fortunately I discovered that 3D printing is what I really love. But I know people who saw some 3d printers in a Maker Faire and bought one without considering they wouldn’t use it more than once a month. Almost all of my friends are graphic designers, and when they ask me if they should buy a 3d printer, I always explain them what they can and cannot do, to make them sure the 3d printer will reach their expectations.
I love your low poly work, why did you start doing this?
I’ve always loved the low poly style, as it makes complex models really simple and it keeps the “idea” of the object. When I first came up with the idea of making low poly Pokemon, I just wanted to design a Squirtle for myself, but when I shared it and received some great feedback I decided to make this project, as people really appreciate to have their favorite Pokemon or videogame character 3d printed in good quality. 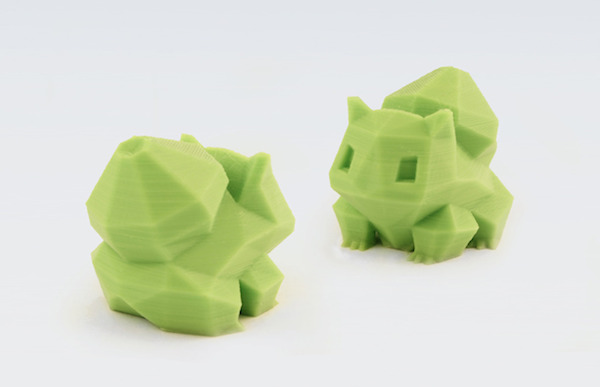 Some of your work is inspired by characters. Do you think you should be allowed to “remix” Mario or Mickey Mouse?
I’m not the original creator of the characters, as I chose those who were really important in my childhood. I publish all the low poly models under CC license (BY-NC-SA) and since the first model was created I knew that this project’s purpose was clearly not commercial. Anyone can remix my models, I don’t mind, as it helps to expand the project. For example, now you can find on the internet some great low poly models that some people designed after they saw my designs (and they didn’t find their favourite pokemon!).
How do we balance sharing & creativity with IP?
I think the balance is what happens at the moment. People create and share, but there’s no commercial use of these models. I’ve already talked with Nintendo’s lawyers, and they’re not against 3d printing or people making models based on their characters. The problem is that 3d printing works differently as the world does nowadays. With 3d printing you don’t buy and item, you create it in your house, and that is what really scares all the merchandising companies.
You share your designs for free but people sell them. These people have had IP issues. What are your thoughts on that?
I can distinguish two different groups. The ones who steal my work (they sell or share my models as if they were the original designers) and the ones who sell them (they attribute the work but get some benefits from selling them). What I do is send them an email telling them what could happen in case they continued selling or stealing my models, and that’s usually all I’ve got to do. 3d printing is based on sharing on the internet, and I can’t stop people from selling my designs. If they offer them on Ebay, Etsy or similar platforms, I may discover it, but if they sell it in their stores I have nothing to do. As I don’t get money for the designs, I’m not usually angry when I discover it. Anyway, I approve it when, for example, people request someone to print a low poly models for them (paying for it). This can be applied to 3D Hubs. I like that, and I understand they are paying for a service and not for the model.
Would you like to make a living from 3D Printing?
My idea is to work in something that benefits the planet in some way, and I think 3d printing is one of the best ways to achieve that goal. In six months I will finish my Design studies, and I would like to start working with a 3d printing related company. And if I someone asked me right now were I would like to work in a year, I would say I would like to work in Colorfabb, Ultimaker, YouMagine or 3D Hubs. I don’t know if you find the last sentence a little bit opportunistic, but I believe that those four companies work and think similar as I do.