YouMagine community member Ralf Naumann is working on the eSherpa an open source motorized cart that you can use to transport heavy loads across rough terrain. We interviewed him to see what the eSherpa is and how he used 3D printing to make it. You can check out the eSherpa website here. The eSherpa was originally developed to transport paragliders to their launch locations but we see lots of potential in this great open source project. Check out the video below.

Why did you make the eSherpa?
Ralf Naumann: Some say because i’m lazy – some say because i’m clever – some say because i’m old….I think it’s because i’m lazy, clever and old 😉
Working as a tandem pilot is one of the best jobs in the world – most of my passengers do paragliding for the first time and I feel for them when they get nervous just before take off and i feel for them when they are totally ecstatic and happy after landing.
But there is one part I really don’t like: carrying 25kg equipment uphill to the take off and lifting this voluminous back pack four times per turn… in main season i do up to 7 turns per day. I’m lazy is one part –  i’m old the other… after my first season I felt my back and my joints badly and i saw the other tandem pilots which have doing this job much longer – they all have problems with their backs and their joints… and I don’t want to ruin my body because of my work. While I payed the bills for my chiropractor I decided to find a solution – because i’m clever…
How long did it take to develop?
The main idea is older but 2 years ago I started to build a prototype – a proof of concept. I bought an electric golf caddy, built it apart and used some glass fiber and epoxy to clue the usable parts together  – this prototype worked somewhat well and I discovered the problems limitations of it. Packing up must be faster, more compact, lighter, stronger, easier and cheaper to build and maintain, easier to control.
I decided to buy a 3D printer and it took me one more year to find the right parts and to design, 3D print and test it. Finally I built  4 different versions and now I’m really  satisfied with the result..
Would you like others to collaborate with you on it?
Yes for sure! This is why I gave it to the open source community. I want to see others building it, using it and thinking about it. Improvements or developing other uses for the eSherpa can be done best in a community. 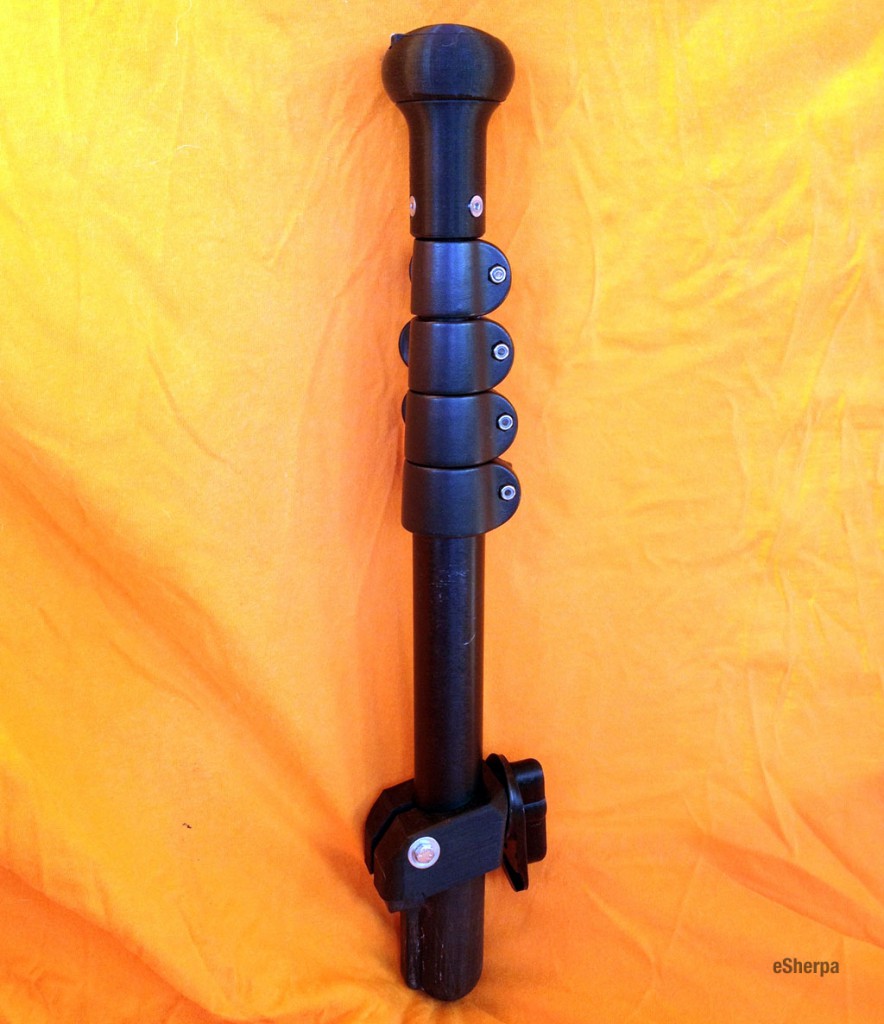 Why do paragliders need a specific cart made for them?
A cart which helps a paraglider to carry their equipment uphill must be flown down again. It has to be strong enough to manage offroad trails and able to carry voluminous weight.  Because of safety reasons it has to fit into the backpack of the pilots harness without restricting movement. Therefore a cart for a tandem paraglider has to be very compact and lightweight. An efficient, easy and quick setup is important because the next guests are waiting – the gondola doesn’t…
Could one use this for many more things?
Compactness, lightness, efficiency and simplicity -this a good base for a lot of other uses. Yes, why not a 3D printed golf caddy, or a caddy for toolboxes, shopping or pattern catalogs… with the right set up an eSherpa can carry everything which needs to go uphill in a easy and healthy way. Or also downhill – with the engines you have e nice brake to bring heavy loads downhill. In a flat area you can use a eSherpa „light“ without engines, batterys and electronics to carry things… 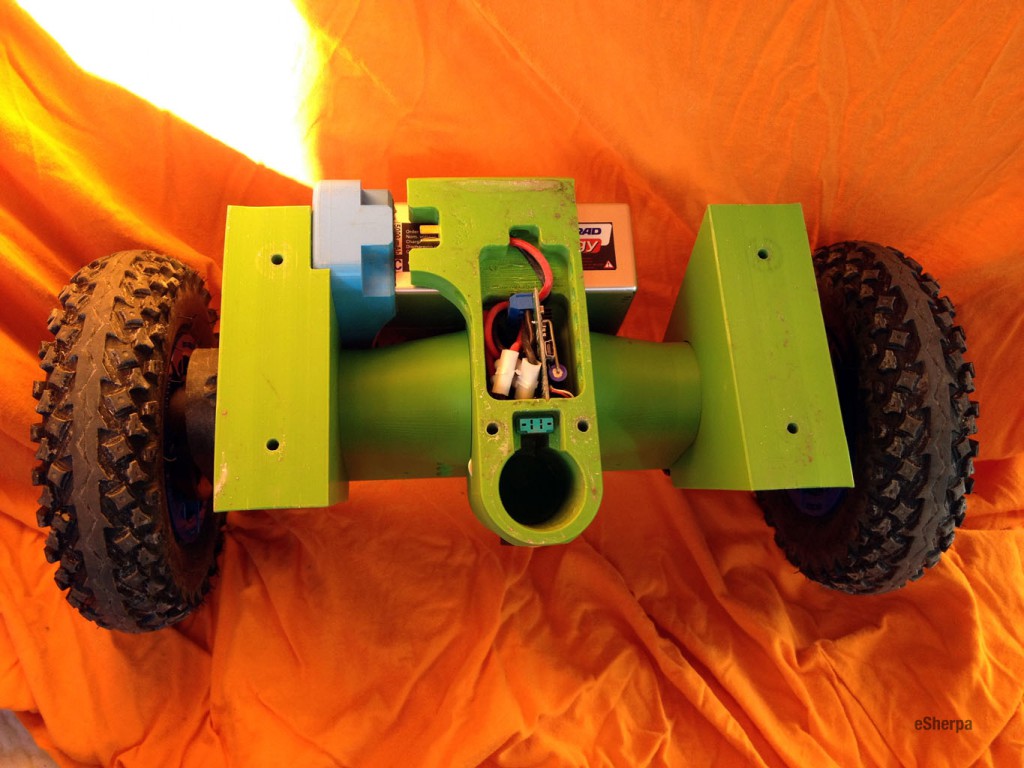 Top view of the eSherpa cart

Does it work well?
Yes, I’m really satisfied with it. I solved a couplet of problems with electronics, 3D printing, maintenance, reliability and stability. It works well now, it works for me!
And the best: no bill from the chiropractor… 🙂
Would you like to improve it?
An invention is never finished…see these three thin wires from the pot to the electronics through the telescope with several plugs – shouldn’t that be wireless?… but there is a risk of over engineering 😉 Uploading the files to youmagine.com was akin to saying: Now its pretty good lets improve it together!