When did you start with 3D Printing?

Back in 2008 I discovered the RepRap project, looking for a circuit diagram. When I found a wiki with a schematic that was open source (hardware) I discovered that the rest of wiki was about making a 3D printer that could make parts to improve itself, I happily volunteered to help that machine ‘evolve’. Of course that was easier said than done. By may 13th I had done my first print and a few days later I started replacing parts. Printed the optoswitch bracket as end-stop for the Z-axis.
What drew you to it?

I already have a special thing for open source. Also, I like how technology can impact on prosperity and wealth especially if it’s in the hands of many people. My dad taught me to solder and make electronics first from a kit and then my own circuits, later he taught me how to program in basic. I kept playing with these things from that point onward.

When I found the RepRap project, it involved 3 types of things: action, shared learning and meaning. Action is “building stuff”. Shared learning means collaborating and developing knowledge. Finally, it has meaning because we’re fundamentally changing who can have access to an increasingly powerful technology. It’s great to work on something and ponder on the implications on wealth and the economy.

The right ideas can have little impact without action. And they’re never good ideas if you don’t continuously learn and meet people with other perspectives.

When did you join the RepRap project?

In March 2008 I started sourcing parts. Immediately after I’d decided that this was the project for me. I also started blogging about it as soon as I started, because I believe the ideas and ideals are as important as taking action.

I was in my graduation year at the faculty of economics, and RepRap was the perfect way to justify avoiding my studies. But in order to graduate and work on RepRap at the same time I needed some help, which I got!

“In a sense, hardware is becoming much more like software, up to the point where you actually fabricate an object,” von Hippel says. “That’s why you’re starting to see open source techniques in hardware. Design is largely going to shift out from manufacturers to the communities.”

Through my role with RepRap and Ultimaker I had the opportunity to talk to the leaders in their respective fields, like von Hippel, Yochai Benkler, Glyn Moody, Frank Piller, etc. This was fascinating by itself, but writing about it helped me connect the dots between their work.

Von Hippel helped me convince my university board and I graduated.

Officially, my thesis was about the viability of the open source development model for the design of physical objects (PDF). In short it investigates why this community works and how fast it’s expanding.

What did you do?

Since 1999 I had founded two IT companies, LowVoice and BudgetDedicated. I learned how to (not) do business, Linux, sever management, virtualization and how to develop your own rack-mounted electronics for datacenters. When RepRap came on the radar, the earlier companies gave me the opportunity to work on that for a while without needing a job on the side. With time and the urge to learn more you can do remarkable things!

How did end up making the Ultimaker? 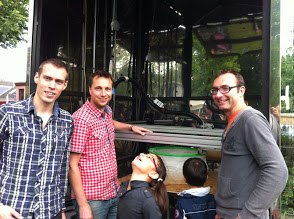 I met my co-founder Siert Wijnia in Amsterdam at workshop for developing green technology (pic 1, 2). There I told someone that I had built a 3D printer and Siert later found out. Siert was setting up the first FabLab in the Netherlands, called Protospace. Martijn Elserman, the other co-founder was one of the first to enter this new lab with amazing digital production machines. The FabLab even had a 60k euro 3D printer from Z-Corp! Siert asked me to show people the RepRap printer and wanted to know whether it would make sense to build them in groups. I told people they shouldn’t start if they wanted nice prints, but they should if they liked to tinker with a wide array of technical disciplines. Everybody there said yes, started building RepRaps and it was exciting! Some had electronics knowledge, others more mechanical, etc. We learned by doing and solved a lot of problems along the way. Martijn joined because he had knowledge on how to make moulds from Z-Corp 3D prints from his first visits to the FabLab. The Z-Corp prints were too fragile and too expensive to be used for making the RepRap, and we didn’t have enough printing capacity to make them with my RepRap. Eventually I printed about 5 sets of parts before I got fed up with that.

The process of making RepRaps took a long time (mind you, between 2008 and 2010 it could be tedious). Martijn had learned about the laser-cutter at the FabLab and decided he would buy one for his home. He made the first Elserbot frames based on inputs from Siert, myself and others. Later we decided to call it the Ultimaker Protobox, the precursor of the Ultimaker Original. When we were getting a lot of requests for kits, we decided to start a company. It seemed like a great opportunity to work on 3D printing full-time (which we were, but making a living from other sources). Eventually you end up spend a lot of time on building a company, not on 3D printing, but with really smart people around you, you can always keep learning.

What do you think the main advantages of 3D Printing are?

It lets you see the world as a place that you can shape to your desire. In software this was already true, you could change things you don’t like by building virtual stuff. To build real stuff, you need to be good with your hands or need a 3D printer. It used to be either expensive or very difficult to make physical objects, with 3D printing this is changing rapidly. Also, it allows you to collaborate (digitally) with people across the world on a real physical object. Perhaps some niche object that just a few people care about, but there are many niches, and the can all reach critical mass as more barriers to entry are removed. Already, many of today’s hardware projects wouldn’t happen without 3D printing. And there are many non-niche things that matter, like the e-Nable project (3D printed custom fitting prosthetics) can find a distributed network of designers, medical professionals, 3D printers, programmers and many other kinds of volunteers. That is an incredibly powerful mix.

I think that a 3D printer can reinvigorate something that we’ve lost during the second industrial revolution. We became consumers and we’re outsourcing design, control and manufacturing of the tools we use. We should be back in the driver seat. And by sharing we can build better things, to which everyone will have access. It’s more than advantages, it’s a fundamental step forward.

Now that we have powerful technology to create, we need a place to share and collaborate!

What are the founding principles of YouMagine?

I’m personally on a mission to encourage people to share more, to empower others and to allow global collaboration. The technology to create things, in the hands of the many can lead us into a new age of innovation and prosperity. YouMagine could play a large role in this. Also, I wanted there to be a place where I would personally like to share things that I’ve made. From before it became part of Makerbot until recently, I’ve been a huge advocate of Thingiverse. Me and many maker/RepRap friends believe we’ve helped make it happen. But now Thingiverse isn’t what it used to be. There has to be a good place to share, and I intend to make YouMagine as friendly as possible and stick to our ideals.

What are the main problems with 3D printing?

People are still creating things in isolation. Their source files are on their local drive. I want 3D design to become more of an online experience. We’ve build YouMagine to support this and are releasing the first features in the upcoming weeks. Also, people share STLs but don’t always share the original files. We want to change that and encourage people to share those, so the next person can take it to the next level.

What is the future of 3D printing?

Recently I’ve had the pleasure to speak with Eric Drexler, a pioneer in molecular nanotechnology. He said that the tools of 3D printing are not that different from those that will be used for the design of nanotechnology. When 3D printing becomes a process at the molecular scale, that can create radical abundance. He and I had both concluded that 3D printing is paving the way for real nanotechnology and the radical abundance that it can create. Not the kind of nanotechnology that keeps shoes from getting dirty, but the kind that cures most diseases, creates an abundance of energy can restore global climate problems and enable interstellar space travel. At the same time he says:

“imagine a world where the gadgets and goods that run our society are produced not in far-flung supply chains of industrial facilities, but in compact, even desktop-scale, machines.”

3D printing is just the beginning but the concept is very similar to what will come after it: Nanotech!

Do you have any hobbies? Or only do 3D printing?

Besides this and 3D printing I like to with electronics and software. I’m fascinated by toolchains that go from idea to thing mediated by software, internet technology, people. I’m also concerned about global warming.

A lot of things do revolve around 3D printing, but I have a beautiful wife and 8 month old daughter. The most amazing creations are still made by nature!