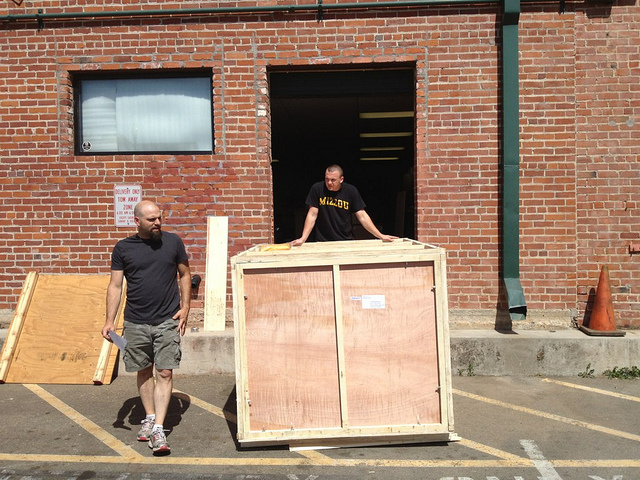 Joris Peels: How did you first become involved with 3D printing?

Brook Drumm: I got a cupcake in January 2011 and became completely obsessed. I started building a Prusa Mendel in February and started a RepRap meetup in march. My PrintrBot designs immediately followed that march. I dove in head first from the beginning.

When did you first decide to make your own machine?
​
The first day I started building the cupcake with my kids, I knew there was a better way. Sourcing a complete open source kit was my first idea, but as good as the Prusa was, the RepRap community proved too diverse and random to believe that was the answer. I set out to do my own design, manufacturing and complete kit from the beginning. It was still early days and lots of room remained.

Why did you want to make a machine?
​
3d printers are complex. 3d printing is hard. I didn’t have all the answers, but narrowing the focus to value printers that were approachable has always been my goal. No one was hitting the $500 mark – what I could afford – so there was real potential there. A broad market was about to emerge.

Why do you share the design files of you 3D Printers?
​
I am a realist. I wasn’t an expert (yet) and I believe in giving credit where it is due. I stand on the shoulders of giants, and my values challenge me to remain humble. There was already significant momentum with RepRap so jumping on the bandwagon was a no-brainer. I wasn’t the first, so I wanted to continue to engage the community and be honest about my own strengths. I have always lives the open source software culture and I am by nature a disruptor. It was a good fit. The early RepRap crowd was a somewhat contentious lot, they didn’t like newcomers wanting to make a profit. Integrity proves itself over time, so I set out to give credit to RepRap while hoping to engage a community. I’ve loved every minute, but it has not been without a steep learning curve and mistakes.

Are you surprised at Printrbot’s success?
​
Constantly, but not because I didn’t believe I had nothing to offer. I’m surprised that no one else has challenged our price points. The wonderful spirit of the open source hardware movement never ceases to amaze. There is a wonderful thing happening in the world right now and it’s a dream to be a part of it.

Open hardware has been essential to get the community involved and to jumpstart 3D printing. It is why my company exists and tons of other 3D printing companies. This movement has already changed the world. I think the open source movement is still having a big effect on the industry due to the number of people contributing to hardware designs and software. It does create a bit of noise, though… not all ideas or designs are equal, but the cream is rising to the top.

How come you can sell your machines for such low prices?

Less profit. Actually, that is a joke I crack at print shows when people ask why Printrbot is so much cheaper. Seriously, though, I still believe price is the first barrier to entry. Instead of getting the most money we can per printer, we wanted to build a long term, stable, scalable business. Now we have gotten really good at sourcing, creative solutions, making our own parts, designing for manufacturing, and ordering at scale. Thats great for the health of our company! We have really set out to gain market share and brand identity by selling a lot of printers. We are in the ballpark of 20,000 printers now – probably rounding up a little, but we will absolutely cross the 25000 mark in 2014.

Yes. We WILL make them cheaper. We have a long list of ideas to continue to drive the price down. We will be able to hit a $299 price point on our Simple Maker’s Kit while improving a few things along the way. Our metal Simple and Plus will come down in price too. We just got a new CNC mill and small injection molder at Printrbot HQ and we are about to put them to work developing some of our cost-saving ideas.

Great value is first. We have never made a perfect printer, but we have introduced more people to 3D printers under $500 than anyone. ever. Its because most people can’t afford to throw more than $500 at a bleeding edge, young, complicated technology. We like to keep things affordable and approachable.

Second, Printrbots have always been hack-able and we celebrate this! We are not in a box. I mean our printers don’t look like microwave ovens. Our current designs are very open so you can see how everything works and moves. Kids love to watch all the movement right out there in the open. Since we give away the files, people do all sorts of crazy mods and its wonderful to see. It is perhaps the easiest 3d printer to customize and change. Certainly, it is the easiest to expand the print volume – just buy longer bars and the Z axis grows. Right now all our bots are like that.

Size would be the third major thing. I am obsessed with minimalist. 3d printers are complicated, so keeping things simple and compact has always been my passion. Making small printers is a real challenge and squeezing out every last mm of space is exponentially harder. Small size isn’t the only goal, though. You have to strike a balance between size, ruggedness, usability and build volume. One benefit to small designs is that you can keep the part count low and materials cost less… leading to a cheaper overall price.

What new things are happening at Printrbot?

We are feverishly at work on finishing our Printrbot CNC machine that we will bring to market soon. Its a whole new set of problems to solve, but we are having a blast. We are also starting work on a Printrbot Pro model. I don’t have a lot of details, but I have been building large printers one after the other in rapid succession to get my head around all the decisions involved. Eventually, we will have a large top of the line printer to see if we can make a splash on the high end of the market.

Another fun thing is that we are preparing a “Toys for Markers” line of project kits to encourage people to build something fun with their printer. Our first kit will likely be a quadcopter kit where you print the body from open source files – just add hardware. There are a lot of decisions involved in what to buy in the RC hobby world, so we want to tear down a few barriers, offer a solid kit and get people building and playing.

We are also investigating the feasibility of making laser etchers, laser cutters, embroidery machines and anything with an XYZ axis.

What do we need to improve on YouMagine?

I moved my files off of Thingiverse and onto YouMagine for a lot of reasons. Frankly, I love the open source philosophy first and foremost. I actually like that there are less bells and whistles here. I am sure we will all enjoy a slow, methodical release of new features over time, but I encourage you to keep it simple. Personally, I am hoping for an API someday that will enable moving a file to print right to our printers with only a phone. This will involve some sort of app of course and cooperation from the developers. I am focussed on mobile and ease of use, so that would be awesome!

Do you think that sharing and remixing files is important?

Absolutely, but I think protecting the integrity and quality of the public-facing designs posted is also important. Making it too easy to publish 10000 slightly different iPhone cases might actually be a bad thing and water down the Kool-Aid. Over-sharing, bad design and the problem of finding great designs in all the noise are all growing problems. I realize YouMagine has a difficult job ahead, but I am looking forward to the future!